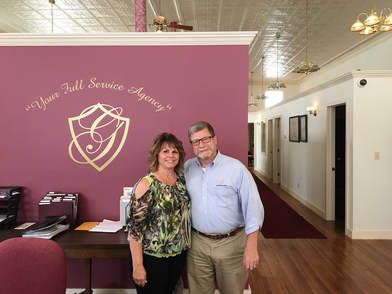 There is no denying that Francesville has encountered some difficulties when it comes to keeping businesses in the uptown area.  Yet, this small town has many strong establishments that are flourishing and providing strength to the business district. In this article, the Gutwein Agency Inc receives recognition for their tradition of serving the community that goes back for 66 years.  The Gutwein Agency Inc, located on the corner of Montgomery and Bill Streets, is truly a cornerstone business for uptown Francesville.

This business first started as Wuethrich Insurance dealing primarily with fire, auto, and liability insurance.  The first owners were Herman and Loretta Norr Wuethrich. In 1952 Herman could no longer farm due to back ailments.  Needing to support his growing family, he bought a small home from Lowell Moore, on the east side of Bill Street, which at that time was located by the current home of Donny and Kay Allen. This became the Wuethrich Insurance Company.  Wuethrich Insurance quickly outgrew this small dwelling. Herman had a new brick building constructed and the business moved to this location on November 1,1956 in what is presently Patti’s Styling Salon. The original house used as their first business has since been demolished.

In 1959, Edison Gutwein, Herman’s son-in-law, married to Chrisann, joined the agency.  Later Herman saw the need for the business to offer both health and life insurance. During the mid 1960’s, Edison bought the business from his father-in-law and renamed it Gutwein-Wuethrich Agency, with Herman still remaining an insurance agent.  After the death of Herman, Edison and Chrisann renamed the business Gutwein Insurance and relocated to the present site on 102 E. Montgomery Street.

This corner building was built in 1899 by J. H. Mallon and housed the J. H. Mallon General Merchandise store.   Mr. Mallon built his new two story brick structure after his store, two doors to the east, was destroyed in the October 1893 fire.  In 1949 Oscar and Jean Minkert purchased the business as well as what was called the Mallon Building. Minkerts’ Dry Good and Variety store, jokingly known to many as Minkerts’ Mall,  was in operation for 40 years until the building was purchased in 1993 by Edison Gutwein. It was under his guidance and hard work that the building was restored to its present condition today.  Family members of all ages contributed to the restoration of the building, which included restoring original hardwood floors and the original 14’ high tin ceiling. In the 1960’s the westside windows and door had  been bricked up and the stained glass windows covered with aluminum to conserve heat. Eleven oversize windows upstairs were replaced with 5 ½’ wide wood trim remaining on all windows and the stained glass windows have been revealed and restored.  This building, known as the Mallon Building, Pulaski County, was placed on the National Register of Historic Places on September 17, 1999.
Today the owners are Dennis and Kitty Gutwein, having purchased the business and the building in 2001.   It was in 2006 that Kitty established Fit ‘n Fabulous on the second floor above their Gutwein Agency.
​
Fit ‘n Fabulous is a self-sufficient 24 hour keyless entry women’s only exercise area with circuit  and over 50 exercise plans.
If you have never visited the Gutwein Agency Inc. on Montgomery Street, it is worth a stop to see the beautiful ceiling inside this historic building.  You will be greeted by friendly faces who are always willing to serve all your insurance and financial needs. Francesville is proud to boast this historic building with a dependable business run by faithful friends to the community.