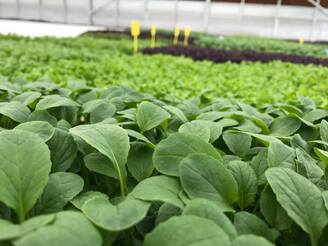 Many may recall the black crow from the Indiana Beach commercial that screeched, “There’s more than corn in Indiana.”  Eden Valley Farms, partially owned by Joel Putt, a lifelong resident of Francesville, proves that slogan is true at least in Pulaski County!  As Joel stated, for several years the Putt family had been looking at ways to diversify their 4th generation family farm, while also enhancing the community.  At one point a fish farm was considered. But instead, the passion for fresh produce which wouldn’t get old before reaching the store, drove Joel to investigate growing lettuce.

Eden Valley Farms, is a hydroponics operation where plants, such as 12 varieties of leaf lettuces are grown, without soil, using mineral nutrient solutions in an aqueous solvent.  Joel stresses that no synthetic chemicals are used in his operation. Various species of herbs are also grown in the Eden Valley Farms facility, which do require a minimum amount of potting soil and peat moss.

The facility is located just north of Francesville on 200 S, across from the West Central School property. It consists of 8 greenhouse bays, several humidity and temperature controlled rooms, which basically are nurseries for germination, a harvesting room, which is targeted at 36 degrees, packing room, an employee lounge and offices, all totaling 130,680 square feet or basically 3 acres.  This facility is among the largest of its kind in the United States.  Currently Eden Valley Farms is producing at 40% capacity and employs 19 full-time employees and 6 part-time employees.  As production increases, so will the need to hire more employees.  Many of those hired are young people who want to stay in the area.  Some of which are recent West Central graduates. Joel is proud to hire those who enjoy the cutting edge of hydroponics and plan to reside in Pulaski County.

Joel finds his biggest challenge is syncing the production to the orders.  Lettuces are a living and perishable product and each plant has its own particular needs and way of growing.  The lettuces are harvested around 3-4 weeks after seeding.  An automated blade cuts the leafy greens from the plant, and the lettuces are carried via conveyor into a refrigerated room to be cooled before packaging.  Joel and his brother, Trevor, general manager, are learning what each individual plant needs and make adjustments accordingly.  The greenhouses are computerized, which means the roof opens to control the temperature, while the shade curtain will open and close based on desired sunlight parameters.  A fine net over the roof opening keeps out insects.  Temperatures and humidity are controlled by computers as well.

Eden Valley is a supplier to Edible Eats, which in turn sells to Meijer chain stores.   Locally, Eden Valley Farms’ lettuces are packaged as The Farmer & Co and sold to Montgomery Market and now to The Farmhouse Kitchen, both located in the Montgomery Mercantile in Francesville. The Monon Meat Packaging, as well as Todd’s Patio use lettuces from Eden Valley Farms.  Joel hopes to expand to other local restaurants as well as to provide Eden Valley Farms’ bulk lettuces for food-service in Valparaiso, Rensselaer, Monticello and Lafayette.

Joel is the son of Brian and Tami (Gudeman) Putt and a 2009 West Central graduate.  He earned a Bachelors of Science in Agricultural Economics and an Associates in Agronomy from Purdue University.   He and his wife Wendy have 5 children.  One of Joel’s goals is to get the Eden Valley Farm running at full capacity which will provide more jobs to Pulaski County and surrounding communities.

Joel invites the community to an Open House at Eden Valley Farms on Saturday, June 12 from Noon to 4:30 p.m.  Those attending will be able to tour the facility and sample some of the leafy products now growing.  Too bad that it is not late summer and we all could enjoy some of our county’s famous corn on the cob along with a fresh lettuce salad made possible from Eden Valley Farms. ‘Lettuce’ all congratulate the Putt family for supporting Joel and Trevor in such an entrepreneurial endeavor!